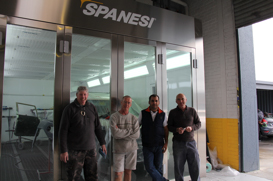 Meet Michael Angi; the proud second-generation owner of Osborne Smash Repairs who has the natural makings of an entrepreneur. When his father Joe returned from Vietnam in 1970, he and his business partner Bruna rented a small workshop in Osborne Park operating as a spray painter and panel beater with his three staff. In 1979, 96 Guthrie Street was up for sale so Joe purchased it and changed their name from F&J Spray Centre to Osborne Smash Repairs.

Michael’s relationship with cars started from day dot when he was born in 1980. He spent every weekend and school holiday at the workshop and it was no surprise to anyone when he commenced a panel beating apprenticeship in 1997. Today he is the company director.

Michael’s dad established a relationship with RAC Insurance after he smashed his own Cortina in 1979. His motto was; quote on a car as if it were your own – a valued shared by RAC.

When Michael started directing, he quickly started building his own relationships with insurance parts suppliers and clients. Now with over 24 staff and approximately 50 jobs a week, Michael says Osborne Smash Repairs has come a long way.

“With the advancements in technology the typical working day is no longer defined as 8 -5. Fortunately I have Tony doing a fabulous job managing the overall day to day running and Dave doing an equally great job overseeing the workshop,” Michael said.

Osborne Smash Repairs upholds a high standard of quality and has adopted the Rotary International Four Way Test which means they ask themselves; is it the truth? Is it fair to all concerned? Will it build goodwill and better friendships? Will it be beneficial to all concerned?

“We understand how reliant we all are on vehicles so we pre-order all parts so as to minimise the time customers’ cars are left waiting on parts during the repair stage. We also clean and inspect all vehicles before they are returned.”

Michael reflects on the 2010 hail storm as the most challenging time in the business.

“Not very often you can say you are booked out 12 months for quotes and 18 months for repairs. It was very financially and logistically difficult to hold several months-worth of parts. It was difficult but we also managed to balance hail repairs without impacting collision clients.

“We can proudly say that we have four staff member on their second round of long service leave and a few more approaching their first. Our family business attitude and longevity in the trade sets us apart from the rest.

“My parents’ hard working ethics and my mentor Alan Shotton have helped me bring the business to where it is today.

Sign up to receive our latest news and offers